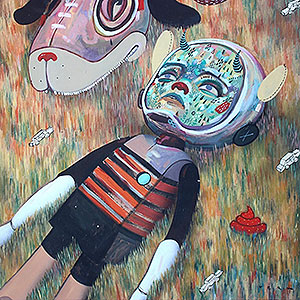 Reen Barrera was born in Paris, France in 1990, but swiftly moved to the Philippines as an infant; where he was raised by his grandparents. As a child, Barrera fixed religious wooden sculptures in his neighbourhood. The excess wood he gathered during the repairs is what he initially used to sculpt his early creations.

He majored in Fine Arts at the Far Eastern University in Manilla. Originally going into the corporate world after graduation, he soon found his way back into the arts wherein he focused on the creation of his Ohlala series, which are based on the tribulations of his past. He often mixes different kinds of paint and materials to produce textures and details that try to find the balance between chaos and peace. Inspired by Basquiat’s heavy and brave paint strokes, he intends to evoke the same kind of imagery in his works to his audience.

“There is this idiom that says “It’s written all over your face” which gave me an idea that regardless of what we say, our true feelings can still be emancipated by our facial expressions. For me, it’s a silent way of communicating something without noise. It is where I find the inspiration to literally remember those facial expressions, create an artwork out of it, and mix it up with different symbols and patterns. Us human beings have the same mold, we all have the same attributes, what differentiate us is the circumstances that we are born into. And one thing that I want to emphasize is the amount of detail each piece have, like us, some have some while some have most. In some artworks, I discreetly take on socio economic classes. Some people are born rich, mid class, some are poor. But the common ground is, everybody will have no choice but to deal with it. So I cover all their heads with a canvas cloth to give Ohlala a freedom to paint their own symbols on their heads as if they are designing their own fate. And I guess that is what we all have in common, the power to make things happen for ourselves.” – Reen Barrera