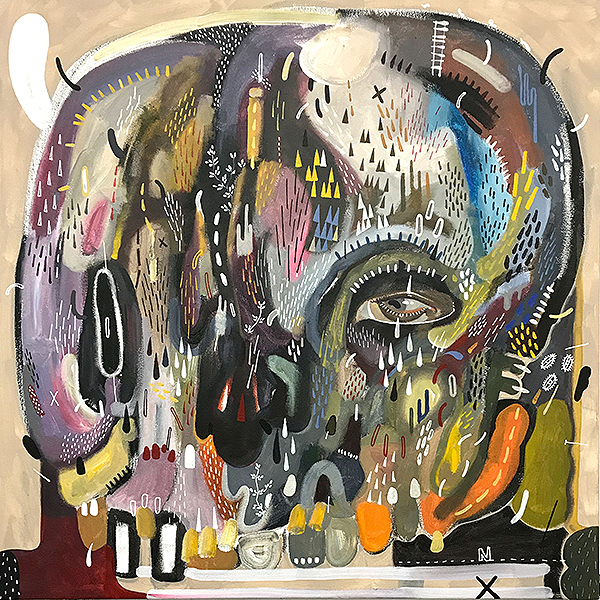 Opening Reception with the Artist(s): Saturday, June 5, 2021 5:00-9:00pm
*Masks and social distancing required
If you have any questions or would like to purchase any of the works below, please send an email to contact(at)thinkspaceprojects.com.
For more information regarding purchases, shipping and payment methods, please click here.

Barrera has taken the idiom “it’s written all over your face” to heart and beyond, crafting his work around a central character he created early on in his career as an artist. Ohlala embodies Barrera’s thoughts, displaying them through a variety of colors painted on the being’s face. This serves as a mechanism to silently communicate, focusing on the unspoken rather than what is loud and clear.

‘Cluster Fudge’ is a collection of work that pulls from facial expressions, allowing Barrera to turn experiences into artwork, taking the literal and mixing it up with symbols and patterns. Through acrylic, oil, and aerosol he crafts this work, embracing accidents like drips, smudges, and splatters, allowing these to lead him to the final product.

“In some artworks, I discreetly take socioeconomic classes. Some people are born rich, mid class, some are poor. But the common ground is, everybody has no choice but to deal with it. So I cover all their heads with a canvas cloth to give OhLala the freedom to paint their own symbols on their heads as if they are designing their own fate. And I guess that is what we all have in common, the power to make things happen for ourselves.”

Using Ohlala as the great unifier, Barrera tackles the idea of difference and circumstance, removing all physical indications and allowing a blank slate. He effectively creates a universe where Ohlala could be anyone, even Barrera himself. In what is quite possibly Reen Barrera’s most personal collection to date, he represents and depicts several experiences that have helped create the artist that he is today, all with Ohlala as the subject.

About Reen Barrera
Born in Paris, France, in 1990, Reen Barrera spent his childhood recreating his favorite cartoons with papier-mâché’. As a teenager, he repaired wooden church statues and would keep the excess wood scraps to make toys and figures out of. He naturally circled back into this practice after graduating from art school. With “Ohlala’ being the omphalos to his universe, Barrera presents a colorful commentary based on personal experiences.