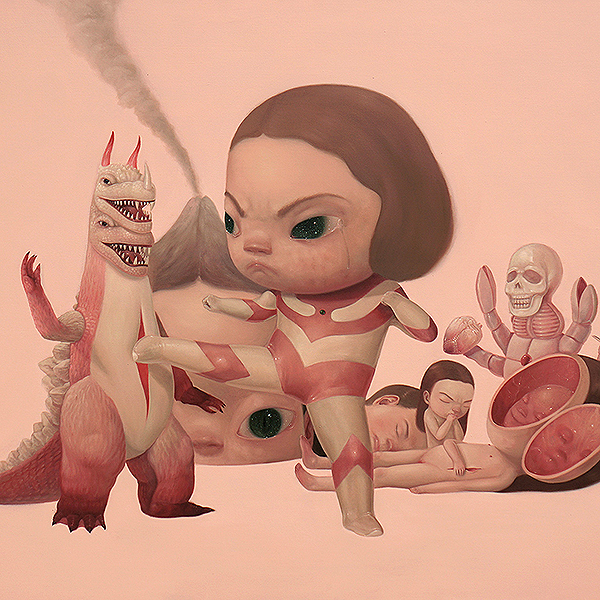 On February 6th, enter the surreal world of Roby Dwi Antono’s EPOS. Drawing on the title itself–which means an epic poem that ultimately recounts the extraordinary shaping of the mortal universe for generations to come in the hopes that both poet and audience will understand themselves better as people or nation–Antono paints starry-eyed children, mythological creatures and, for kicks, the occasional pop culture icons. True to EPOS, Antono always aims to convey a message within his paintings.

Roby Dwi Antono (b. 1990) is a surrealist painter based out of Yogyakarta, Indonesia. His visual language forms connections between classical renaissance paintings, futurism, and fantasy, and draws inspiration from science fiction and natural history.

“I would often say that my works contain a set of idioms which have very personal meanings to me. I leave some visual cues in my works which act as a melancholic conundrum, for my audiences to set their eyes and mind upon. I love it when people try to guess the message behind my works and in the end each person will have their own interpretation, which is good because it opens the way for another enriching dialogue between us. The human experience affects both the idea and visual aspect of my works.” – Roby Dwi Antono

An epic poem, or epope, is a lengthy narrative poem, ordinarily involving a time beyond living memory in which occurred the extraordinary doings of the extraordinary men and women who, in dealings with the gods or other superhuman forces, gave shape to the mortal universe for their descendants, the poet and his audience, to understand themselves as a people or nation.