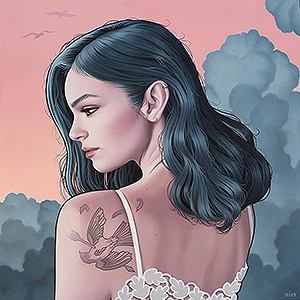 Toronto-based Sarah Joncas first exhibited with the gallery in 2009 when only 19 years old. Since then, her accomplished work has developed technically and conceptually, garnering international attention for its moody stylization and emotive impact. Her portrait-based paintings focus primarily on female subjects that function as alter egos or symbolic avatars for social, psychological, and personal themes. The figurative becomes a vehicle for more existential and constructivist emphases, an armature around which to posit narrative suggestions and symbolic inferences. Always striving to create a moment of discomposure or tension in her works, Joncas aestheticizes with melancholy and melodrama, tapping into an emotionally charged visual spectrum.

Joncas began her art career intending to pursue illustration and animation, directions that clearly still inform the visual diction of her current work. Highly refined areas of figurative rendering, like the lush skin tones she achieves with oils, are combined with elements of a more graphic sensibility, executed in acrylics, to establish compelling visual tensions between realistic dimensional space and flattened stylization. An early interest in animé and manga, as well as in those neo-noir cinematic references aforementioned, helped to galvanize Joncas’ interest in character-based works. Often posited in heightened emotional contexts, her protagonists are framed by suspenseful allusions to an overarching story or caught in the midst of ambiguous or invisible unfolding scenes. This penchant for plot, mystery, and symbolism is captured in moments of dynamic stillness in which action is both suggested and seized. The surrounding elements in her works, whether animals, objects or patterns, take on concomitant meanings, further reinforcing the larger thematic intimations of her works.