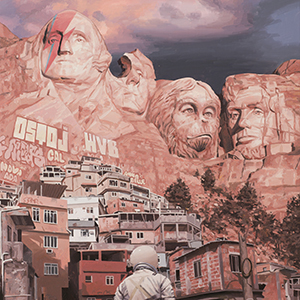 “It’s 2020 and we’re living in the future. We can’t go outside and there’s no more toilet paper. This is America.

In 2018 I had my last show at Thinkspace Projects in Los Angeles. It was titled 1984 and was a reimagining of George Orwell’s haunting book, which had recently spiked to the top of the Amazon best seller’s list because it was suddenly, and alarmingly, relevant again. But I set each piece in a fluorescent colored version of Los Angeles in the 80’s, filled with Rubik’s Cubes, vintage Lamborghini’s, and Phil Collins. Things in America were looking dark but I wanted the paintings to feel almost impossibly light in contrast to their dark overtones.

It’s 2020 and an election is looming. Like a lot of people I’ve been wondering if this is a turning point in American history. But which way are we turning?

In 2018, after living most of my life in Boston, I moved across the United States to Los Angeles. I’ve been thinking about the long divide between my old life which I left behind and the new city I’ve just arrived in. I’ve never felt the vastness of America as much as I do now. All the widely varied places, people, and landscapes that lie between the places I’ve lived. I wanted to make paintings about the open expanses, the purple mountains, the Grand Canyon, the monuments we’ve built on purpose and by accident to the history of our nation.

It’s 2020 and, like a lot of Americans, I worry about the future. Unlike a lot of Americans, I make paintings about the future. I’m inspired by scenes of dystopian movies and novels, and I’m always curious why we’re so drawn to the end of things. Why do we have that dark impulse to see our civilization washed away by tidal waves, by asteroids, by terminators, by apes in clothes, by Thanos? Often enough those scenes feel like nothing more than CGI. But other times it’s hard to shake the feeing that we’re inevitably crashing towards the future that we’ve already predicted. That we have no real control over it, like the extras in a Godzilla movie watching helplessly as a giant monster tears down our city.

In 2018, after my 1984 show wrapped up, Andrew Hosner, the co-founder of Thinkspace, reached out to me and pitched an idea for my next show – national parks. This seemed like a good idea – the astronaut in my work can, after all, go anywhere, and I liked the idea of exploring the natural beauty here in America. Of doing my take on a landscape show. At the time, the president was talking about selling off parts of the national park system and it seemed an apt metaphor for the way we were trading the most visible and beautiful parts of our country for short term profits. As I started working on the paintings that would become this show, though, it quickly grew to something beyond national parks. I started thinking about the landscapes and monuments of America and what they represent, to the believers and to the cynics. To the people this country has helped in so many ways, and to the many it has pushed aside or displaced. I thought about the endless scenes from movies where our recognizable landmarks are washed away or blown up. I thought about the Hudson River school and Edward Hopper and the countless other American artists over the years who have painted the American landscape in a way which said something about the times they lived in. I thought about being part of that long tradition.

It’s 2020 and we’re awaiting a pandemic to pass us by. I’ve been thinking about this show for two years now and it never occurred to me that when it arrived, it would do so silently and quietly, all of us hunkered away at home, looking at my story of America on screens. All those movies, all those novels, all of my paintings depicting a lost and empty future suddenly feel a bit too real.

In 2018 Donald Glover, under his musical alias Childish Gambino, released a video for his song titled This is America. It’s cinematic. It’s a beautiful and deeply scathing indictment of violence and race in our country. It feels chaotic and and claustrophobic and weirdly, confusingly, beautiful. It’s also thickly layered with cultural references, with everything from Jim Crow era imagery to Michael Jackson videos. There’s a sense of menace in it that feels hard to escape.

It’s 2020 I’m not sure I recognize the America I live in. There’s a sense of menace in this country that feels hard to escape. And yet despite that feeling, the future is not yet written. It’s not over for us. We still live in an endlessly beautiful country. We’ve chipped away at it, through deliberate efforts and our own carelessness. But it’s still there. It’s not too late to do something and I wanted to capture that sense of hope amidst some dark times.

It’s 2020. Welcome to the dystopia of your choosing. This Is America.” – Scott Listfield