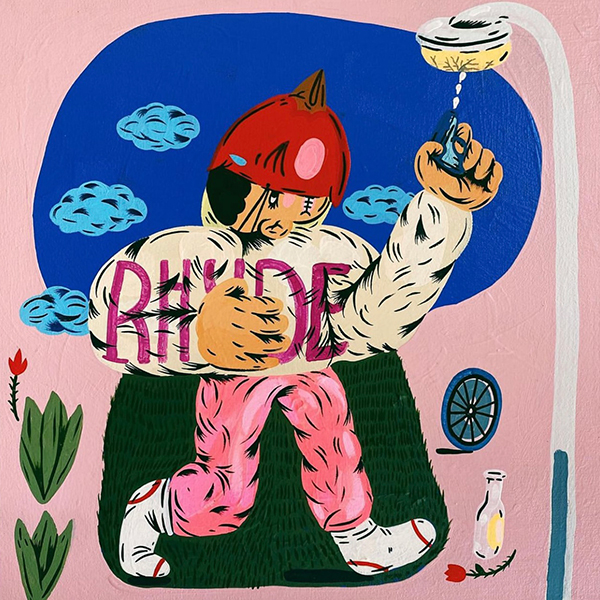 Over the 17 years since their conception, Thinkspace Projects has carefully and thoughtfully built up their reputation as one of the most exciting and reliable sources of New Contemporary Art in not just Los Angeles, but on a global scale as well. They have proven their curatorial prowess, lending their skills as a gallery across the country and the world. No matter how many exciting endeavors they embark on, their LA gallery remains a cultural hub with new shows every month that span themes, styles, and mediums.

Now, they take commitment to the space and the Los Angeles art community and push the boundaries of the gallery quite literally, spreading down the block into a new space in addition to the existing gallery! On July 9th, Thinkspace makes their expansion official, with four simultaneous shows that juxtapose and compliment each other perfectly.

In Gallery One, visual artist RYOL’s (aka RYO LAKSAMANA) new body of work, ‘Ready Known’ fills the space with paintings that reflect his dissatisfaction with reality in comparison to the world he has imagined as a kid watching childhood’s cartoons. His pop surrealist artworks are skilfully done, illustrating issues in a patriarchal society, social behaviors and the fluidity of modern day gender and gender roles.

Mwanel Pierre-Louis’ ‘Memories and Manifesting’ takes over Gallery II, rounding out the already established Thinkspace locations. With work that combines realism and abstraction in a narrative that draws from personal interactions and pop references, Mwanel explores juxtapositions of fragmented experiences and a strong emphasis on the relationship between subject and color.

Then with just a quick walk next door, Thinkspace presents their new space with work from many more exciting artists. Gallery III, one of the new spaces, holds Sentrock’s ‘Crash Course,’ which explores the artist’s life right now as a new father living in the West Side Chicago. Sentrock uses this collection to find peace in life while everything around us is a struggle, hoping to pass that message on to the viewers. This collection contains his signature iconic bird mask in many of the pieces, representing escape.

Gallery IV houses the group show GROWTH, featuring work from artists like Abi Castillo, Caroline Liu, Dredske, Jamiah Calvin, Kiko Miyares. With each painting in this collection, viewers are taken on a journey not just through the new space, but through the mind of each individual and the collective. Somehow both embracing conflict and cohesion, this show represents pure potential.

With two floors, over 4,700 square feet of exhibition space, plus a 15,000+ square foot courtyard that connects the two spaces, this is certainly a massive undertaking, but it’s one the Thinkspace team is entirely prepared for.

“We were very involved and hands-on throughout the entire design and renovation process, which resulted in two beautiful new gallery spaces for us to expand our program within, not to mention one of the nicest courtyards in LA for our patrons to enjoy. If all that wasn’t enough, we’ll launch our residency ‘The Bungalow’ this fall. As we prepare to celebrate our 18th birthday, we feel we are just getting started.”

Come see the new space and explore over 8,500 square feet of exhibition spaces and their new fully landscaped 15,000 square foot courtyard that connects the two spaces along with DJ Mr. NumberOnederful, refreshments, a video installation from Michael Allen, live painting with Goopmassta, installations from Balloonski and Spenser Little, a taco stand and more, all for the opening night.

RYOL aka RYO LAKSAMANA bio:
Originally from Banyuwangi in East Java, Ryo Laksamana is a recent graduate of the prestigious Institut Seni Indonesia in Yogyakarta. This young artist’s career, however, began much earlier while he was still a student, and in the past few years his artworks have been exhibited quite extensively within and beyond the borders of Indonesia.

Upon closer examination the subjects this young artist’s works address are far from frivolous. Among them, critiques of traditional patriarchal society, social behavior that is quick to judge others, as well as the fluidity of modern day gender and gender roles, to name a few.

MWANEL PIERRE-LOUIS bio:
Mwanel Pierre-Louis is an Artist based out of Miami, Florida. His work combines realism and abstraction in a narrative that draws from personal interactions and pop references. Mwanel’s paintings feature juxtapositions of fragmented experiences and a strong emphasis on the relationship between subject and color. Born in NY, from Haitian descent, he’s spent time living and absorbing the culture from New York, Miami and Los Angeles.

SENTROCK bio:
Joseph Perez, best known as “Sentrock” is a self taught street artist. Sentrock witnessed street art as a form of expression, birthing his interest to pickup a spray can and continue to share his artistic voice. His early works were developed from graffiti writing in Mexican-American neighborhoods. Sentrock’s signature bird-mask over a human figure has become his most recognizable declaration. Sentrock describes his bird-mask as analogous to humanity: a person who is able to find or escape to their freedom by placing them in a different reality.