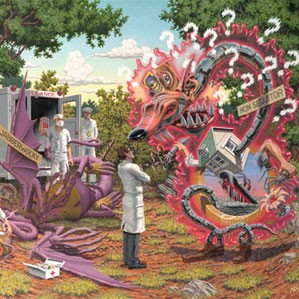 (Fort Wayne, IN) – The Fort Wayne Museum of Art in association with Thinkspace Gallery are pleased to present new works by Robert Williams. SLANG Aesthetics! is on view at the Fort Wayne Museum of Art Gallery from April 22nd to July 23rd , 2015. The exhibition is Robert Williams’ first major body of work to make its debut in the Midwest, and will feature new oil paintings by the artist alongside a suite of drawings, a series of large-scale sculptures fabricated with the assistance of Gentle Giant Studios, the largest array of ephemera to date.

Williams, a self described Conceptual Realist, continues to create artworks that elicit a response and offer an opinion. Relying on concrete, and relatable, imagery to invoke ideas and concepts, rather than on the non-committal spasms of abstraction, his work continues to cut, seethe, confront and move. Not for the faint of heart, Williams speaks an unruly truth that captures the dark, the beautiful and the appalling tenor of our modern world.

I have looked at the sizable accomplishments of the graffiti artists during the past thirty years and wondered how they were able to buck the powerful authorities that at one time channeled the direction and successes of the international art community. Artists like Keith Harring, Jean-Michel Basquiat, and Kenny Scharf have somehow skirted the requisite art movements of the sixties and seventies. What were the lax conditions that allowed these talented young artists to slip by without having to be abstract expressionists, conceptualists, or minimalists? The answer is that they didn’t sneak by. They rode the coattails of two other authentically approved art trends that had been long sanctioned: pop art and conceptual art’s little cousin, performance art.

But how sophisticated is graffiti? It is daring and exhibits loose spontaneous graphic public expression—the language of the people. At least some of the people, the street level, disenfranchised people. Is communication through street level art speak really sophisticated? And is inner city credibility (street cred) all that worthy for art buyers, art critics, museum curators, and foundation administrators? The solution is simple. The proper functionaries simply bestowed the coronet of sophistication on graffiti. Remember, graffiti to the general public is vandalism.

And, what about the other low level idioms of the graphic world? What about comic book cartoons, pulp magazine covers, hot rod art, biker art, tattoos, girly magazine photography, science fiction illustration, psychedelic poster art, surfer and skateboard art, and a myriad of other second class disciplines that don’t quite make the cut?

Maybe we might want to take a look at the entire concept of “sophistication”. Of course, sophistication is a credible behavioral classification. It denotes forethought, concern for ourselves and others, and continuing aspiration to better oneself. I would hope to achieve this personal status myself. But the word has easily been used to exemplify admittance to the privileged parade ground inside the ivory castle of the aloof, and from those pearly battlements the elite can command the cultural high ground. Two things have come to personify sophistication. One is the joint, or simultaneous agreement to defer authority to the consensus of success. Two is money. Both of these factors certainly sway public opinion.

The current international capital of artistic sophistication is New York City. Ever since the end of the second world war, every small city in the United States that has an art community has looked to New York for cultural parenting.

However, an interesting anomaly has developed over the years. “Sophistication”, like any other folkway, travels slowly with misinterpretations happening along the way. By the time high culture reached the west coast it had traded it’s Brooks Brothers suit for cut-offs, a Hawaiian shirt, and flip-flops. Art on the west coast, as much as it tries to maintain blue blood affectations, shows mutations. It just doesn’t have the aloof adroit coldness the eastern seaboard art society seems to portray. What’s even more amazing is the fine arts arbiters in the west can’t really comprehend the atrophy of snob status ebbing away right under their noses. This high class act of chic authority among art dealers is understandable as there is a constant inward flow of uneducated nouveau riche buyers seeking upper-class fulfillment through the arts. This is one reason some high art seems sophistically stupid.

Nonetheless, there is no place for blame. The human character will never change. In reality, art is not tangibly substantial enough to have real villains, just crackpots. Years ago, a New York art dealer told me, “Be careful with the fine arts world, it is real fragile”. How true. The art universe makes “smoke & mirrors” look like an impenetrable fortress. But, even with these delicate cultural shortcomings I’ve joyously participated in a life of creative adventure.

Art is quite possibly the largest and most profound cerebral playing field in all human endeavor. Art is exactly what you make of it.

Pablo Picasso said it best, “Sophistication is the greatest enemy of the imagination”. Sophistication as we and our parents knew it, is gone. Anything like that now is pure ego with quiche on its breath. With the Internet, everything

is changing so fast that slang and colloquialisms are as valid as the kings English. In fact, slang represents freedom from the pretension of sophistication. This leaves the artists in a position to function as they please.

Looking back, art history does have some curious ripples that have come from populist twentieth century trends. For example, take the German expressionists from around the period of just after the first world war. In 1919, Germany was in a state of extreme social and economical flux. The war had destroyed faith in the future, and earlier ideals were forsaken for a much more rightwing totalitarian Germany. A number of young artists surviving the horrors of war felt compelled to express an attitude that nothing could be worse than organized society. The brutal abstraction these artist portrayed paralleled the harsh injustices that power had fermented. By the 1930’s, the Nazi party had gained control of Germany on the platform of bringing organization back. The German expressionists were considered the very embodiment of the leftist sickness that modern anarchists endorsed. However, history has vindicated these rebels long after Adolf Hitler had them run out Germany.

They painted in a style of colloquial vulgarity that lead to the liberation of the entire art world some fifty years later. There are many examples of their work that are still considered too controversial today.

Another poignant incident in popular graphic history that has gone basically forgotten is the Dr. Wertham comic book hearings in the United States Senate during the McCarthy era of the 1950’s. In 1952, Dr. Fridric Wertham came out with a best selling book titled, Seduction of the Innocent. It was about the evils of comic books.

It wasn’t long before there was a senate investigation exploring the effects comics had on creating juvenile delinquency. It must be pointed out that at this point in time the entire orthodox art world was hypnotically wallowing in abstract expressionism and the virtuosity of drawing and draftsmanship was considered illustration. The art cognoscenti thought of comic books as low class commercial art.

Nonetheless, some of the finest writers and draftsmen were put on the senate chopping block. It took twenty years for comic books to regain their former dignity. As a form of vengeance to this governmental suppression, underground comix sprang to life in the 1960’s. The tolerant use of modern creative expression has placed sophistication in the same category as an Emily Post dissertation on proper dining etiquette. “On which side of your melon spoon do you place your caviar fork”?

During the last fifteen years comics, (now known as graphic novels), have completely dominated international culture through movies, television, and the internet. And still the art authorities and critics insulate themselves from comic book influence by securing their untouchable status behind a thin membrane of sophistication. The only justification that would seem to be credible for these pretenses by art actuators is that sophistication is a form of performance art—something along the lines of visiting a homeless encampment and affecting airs of an eighteenth century French Bourbon king.

The cartoon, a form of simple visual presentation, is the most versatile and malleable form of communication in the recorded vocabulary of art. Anything that can be imagined or thought up can be best abstracted or translated by cartoon. Yet the lowly cartoon, with it’s giant vernacular, is treated like a doodle. With art, the bottom will always come to the top. The strongest creative urges seem to be basic and euphemistic, or, simply, ‘slang aesthetics’.