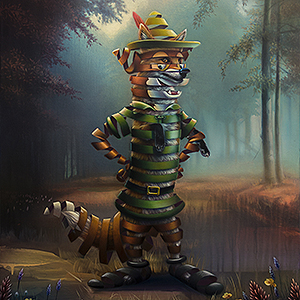 Dutch artist Stefan Thelen, better known by his moniker Super A, creates hyperreal murals and studio paintings that explore the world of human contradiction. Through the combination of realistic and surreal imagery, Super A is often dealing in visual metaphor and social messaging, questioning the ideologies and cultural myths we’ve become too complacent at accepting without critique. Interested in the interrogation of objectivity and its ultimate exposure as a construct, Super A combines elements of realism with the free reign of fiction to produce unexpected results.

Apostasy is Thinkspace’s third solo presentation of Super A’s work. His well-established alias is a creative alter identity created to explore more contentious and difficult subject matter as a muralist in the public sphere. His most recent body of works strips cartoon, fairytale, or pop cultural archetypes of their fantasy and veneer, revealing the realistic or historical counterparts beneath them. An apt commentary on the dissimulation of popular cultural mythology, Super A deconstructs its theater.

Super A is a mystery that leans on the art doing most of the talking for Stefan Thelen, taking the viewer into a wonderland walking down a yellow brick road in which Thelen’s figurative and modern surrealist compositions are providing playful puzzles to decipher.