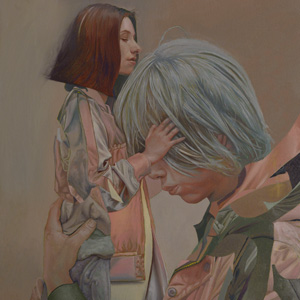 A muralist and image-making duo from the Netherlands, Telmo Miel is Telmo Pieper and Miel Krutzmann. They have worked together since meeting at the Willem de Kooning Academy in Rotterdam in 2007, officially becoming Telmo Miel in 2012.

The duo’s murals are both surreal and realistically rendered, with a tremendous amount of detail and vibrant color. Able to work fairly seamlessly, their styles have combined to such an extent that they’re able to execute multiple areas in tandem, exchanging places and completing each other’s work.

With a respect for both visions, they found that ‘perspective’ is one of the most important & interesting aspects of art. The perspective of the maker compared to the viewer, the difference in intend, meaning and interpretation. Perspectives on concept, colors and composition and so forth. This idea of ‘multiple viewing points’ and opinions is an ongoing discovery in their work.

They often execute their pieces on a monumental scale, creating huge architecturally sized spray-paint paintings on building façades. Combining multiple elements in a single composition, they layer references to the human and animal worlds to create complex creatures and fantastic scenarios. With positivity, humor and a touch of the romantic, their work is arresting and epic.

Recent paintings contain playfulness in abstraction of reality, attempting to make the viewer see subjects with a different eye; They grew into using multiple images, layered over one another. By cutting away a top layer, another comes forward to complete the design. This provides a convenient abstraction, but the intend is more so to create a sort of marriage between figurative parts. Pieces that weren’t normally seen as one, but now complete each other in weird and beautiful ways.

“Dutch artist duo Telmo Pieper and Miel Krutzmann join forces as TelmoMiel, the moniker under which they’ve painted large-scale, surreal murals all over Europe. While well-versed in traditional figure painting, the artists distort and overlap their realistic renderings to create something dreamlike and surreal. They layer iterations of the same subject over one another in a way that evokes double-exposure photography. Telmo Miel’s work, whether it contains something as morbid as an animal skull or pleasant as a beautiful human face, retains a quality of softness. The images drape over one another like sheer, silky fabrics, enveloping buildings in their dreamy haze.”
Hi-Fructose Magazine