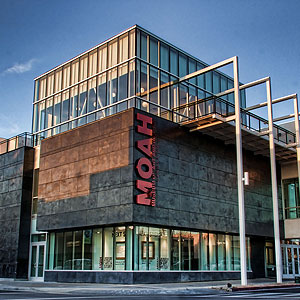 ‘The New Vanguard II’ at the Lancaster MOAH

Public FREE Opening on Sunday, October 21 from 2-6PM in tandem with the completion of this year’s new murals for POW! WOW! Antelope Valley + a classic car show + food trucks & more

(Lancaster, CA) – The Lancaster Museum of Art and History, in collaboration with Los Angeles’ Thinkspace Projects, is pleased to present The New Vanguard II, a dynamic group exhibition of works by international artists working in the New Contemporary art movement. The highly anticipated follow up to 2016’s successful first iteration of The New Vanguard, on view in tandem with this year’s POW WOW! Antelope Valley will feature special solo projects by artists Sandra Chevrier, Seth Armstrong, Craig ‘Skibs’ Barker, and Brooks Salzwedel.

Alongside the focused solo presentations by Chevrier, Armstrong, Barker, and Salzwedel, the exhibition will include site-specific installations by Andrew Hem, Dan Witz, HOTTEA, Isaac Cordal, Jaune, and Laurence Vallieres.

Sandra Chevrier | Cages and the Allure of Freedom
The Montréal-based Canadian artist creates work that explore identity as a locus of competing imperatives and complex contradictions. Drawing parallels between the assumed invulnerability of the superhero and the impossible demands placed upon the contemporary individual, Chevrier creates literal and metaphoric masks by combining comic book imagery assembled from found and imagined sources. Her dystopian spin on the iconic figure of the superhero looks to reveal the flaws in the staged extroversion of the superficial veneer.

In Cages and the Allure of Freedom, her first significant solo museum presentation, Chevrier will be showcasing large-scale sculptural works for the first time including three massive portrait based reliefs alongside three life-sized, hand-painted busts complementing some of her largest two-dimensional acrylic on canvas works.

Seth Armstrong | Lil’ Baja’s Last Ride
Los Angeles-based painter Seth Armstrong creates paintings that seize time, near-cinematic moments of suspended or implied action. Some offer vast views, and others contracted intimacy, moving freely in and out of public and private spaces to create ambiguous vantage points. Known for paintings that self-consciously capture the act of looking – whether as a voyeur in trespass or a participant in the landscape – Armstrong captures the simultaneity of the city as a place of endless, contingent narratives, jarring interruptions, and suspenseful pauses.

In Lil’ Baja’s Last Ride, Armstrong combines his patented interest in the grittier recesses of urban life with his penchant for humor and a good inside joke, dedicating the exhibition’s title to his recently retired car, the unsuspecting casualty of a freak fire in the MOAH’s parking lot.

Craig ‘Skibs’ Barker | ‘Suzy is a Surf Rocker’
A Huntington Beach native based in Southern California, mixed media painter Craig ‘Skibs’ Barker creates imagery inspired by print media and the graphic sensibilities of 80’s SoCal punk and surf, the subcultural terrain shaping the 80’s in which he grew up. His works feel surreal and partial, intentionally stylized to the point of decontextualization. By framing figurative subjects with an element of voyeuristic ambiguity, Barker’s compositions have the intuitive spontaneity of a Polaroid and the deliberate staging of a stencil. Familiar and far, they feel strange in their proximity.

Brooks Salzwedel | Rut in the Soil
Born in Long Beach, Salzwedel creates translucent landscapes that shift in and out of solid and ethereal states. Like fluid worlds suspended in a cycle of perpetual haunting, the imagery often feels loosely real but undeniably hallucinated and invoked. His works play with the depiction of these unhinged natural and hyperbolically unnatural physical states, combining sparse terrains with fictional mountain ranges and shadowy, diaphanous atmospheres. His mixed-media drawing-based works are created using a combination of graphite, mylar and resin, tape, colored pencil, and ink.