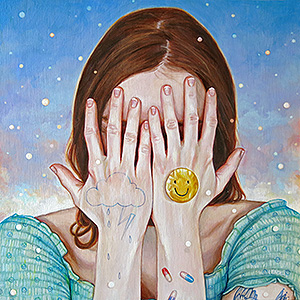 (Lancaster, CA) – The Lancaster Museum of Art and History, in collaboration with Los Angeles’ Thinkspace Projects, is pleased to present The New Vanguard III, a dynamic group exhibition of works by international artists working in the New Contemporary art movement. The highly anticipated follow up to 2018’s successful second iteration of The New Vanguard, on view in tandem with this year’s POW WOW! Antelope Valley will feature special solo projects by artists Kevin Peterson, Kayla Mahaffey, Kathy Ager and Alex Garant.

The New Vanguard III, in keeping with the first two installments, will present a diverse and expansive group of curated new works. In addition to the solo exhibitions on view from Mahaffey, Peterson, Ager and Garant, we will also be presenting our ’Small Victories’ group show focusing on suicide prevention and mental health. We’ve lost one of our greatest allies and friends and one of our rising stars to this ever growing epidemic in recent years. Sadly this issue is very wide spread in the creative community and we want to help raise awareness and funds. If it helps guide just one person out of the darkness, it was more than worth it to mount this collection of works.

KAYLA MAHAFFEY’Adrift’
Born and raised on Chicago’s South Side, Kayla Mahaffey (also known as KaylaMay) is quickly becoming one of the city’s most sought-after artists with her unique blend of flat, cartoon elements with brilliant photo-realism.

Mahaffey’s work gives voice to the unheard stories of contemporary youth and, as explained by the artist, “serves as a guide to bring hope back into our daily lives by cherishing each moment not in the mindset of an adult, but with the fresh eyes and imagination of a child.”

Being born and raised on the South side of Chicago, IL., only ignited Kayla’s love for all things art. The artist elaborates, “seeing the struggle and the support from the community made my work evolve to a concept that is personal to me. I continue to further my technique, and creativity in my field in order to paint a beautiful picture of a new world for those around me. Living in our society can be tough and most of the time we have to make the best of it. A wild imagination can take you so far, but at the end of the day we need to realize and observe the world around us. And the world around us is where I find my inspiration to paint. Colorful paintings that contain hints of whimsy and realism that tell a story of inner thoughts and personal issues that sometimes go unheard.”

ALEX GARANT‘Deconstructing Identities’
Toronto-based, Canadian, Québéquois artist Alex Garant is a painter known for her hyper-realistically rendered Op art portraits in which the faces and eyes of her subjects seem to skip their registers through image redoubling and superimposition, Garant is in search of the frenetic internal life of the sitter.

Ager begins her process with language – an idea or expression often gleaned from music, a book, or some other source that resonates personally. She then endeavors to resolve the concept visually through objects and composition, assembling a patchwork of references – some collective and shared from pop culture, others steeped in the idiosyncrasies of the personal. Both poetic and revelatory, Ager’s works feel charged with the simultaneous misery and beauty of contemporary appropriation – and express the current world through the formal repositories of the past to create anachronistic moments of resonance and delivery. Ever present amidst moments of undeniably expressed disappointment and disillusionment are redemptive linings, beautifully poignant discoveries, and playful, irreverent mirth.

The seductive darkness with which Ager reveals universal human longings is both disarming and consuming. Broken hearts are offered up as organs in a bowl, skeletal memento mori abound, and dating feels about as abject in the modern world as butchery; books are stacked with suggestive spines, and flowers wither while fruit threatens to decay. The abattoir is never far from the transcendent ambitions of classical statuary in Ager’s world, while beauty is embroiled in the vulnerability of intimacy and self-exposure.

KEVIN PETERSON‘Embers’
Kevin Peterson, a gifted hyperrealist painter, creates a fictional world in which innocence and collapse are brought into difficult proximity. His arresting images combine portraits of children accompanied by kindly sentient beasts in a state of kindred displacement. Alone, though together, in strangely desolate, richly graffitied urban scenes, these babes and their benevolent conspirators appear interchangeably as beacons of hope and symbols of dispossession.

Always in search of poetic tension and compelling contrasts, Peterson alloys unlikely parts: beginnings and ends collide, the young appear in worn and weathered worlds, innocence is forced into experience, and the wild infringes upon the ‘civilizing’ city limits. In Wild, Peterson explores themes of protection and marginalization, staging wild animals, ironically, in the humanizing and civilizing charge of caregivers. Though a recurring suggestion in previous works, the role of the animal in a nearly shamanistic role as protector and watcher appears more overtly in the new. Small children are attended by wild bears, watchful raccoons, gentle fawns, mythic looking ravens, owls, and jungle cats, among others, as they hold a living and protective vigil against the crumbling architectures around them; their guardianship staged like a protective bulwark.