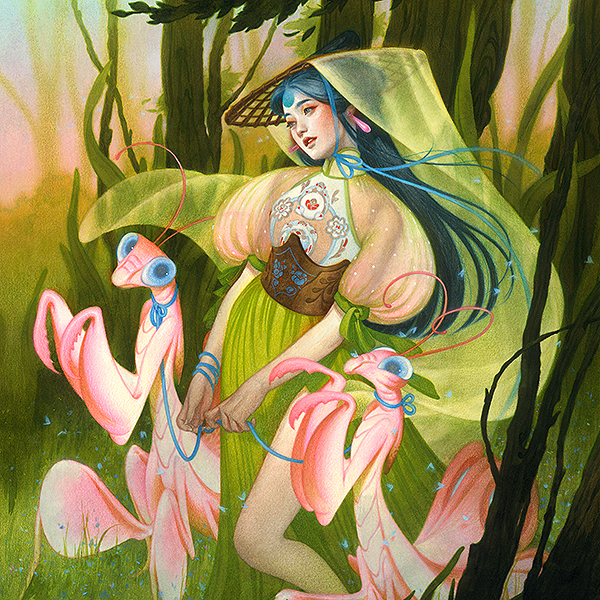 Thinkspace Projects presents Tran Nguyen’s fifth solo show with the gallery. ‘Remedy’ is a collection of work focusing on the complicated relationship between humans and nature. With striking paintings and illustrations that create a balance between the soft and beautiful and the borderline haunting, ‘Remedy’ creates a utopian world where a small human population and a variety of flora and fauna coexist in a symbiotic relationship, giving way to magical species and fantastical visuals.

“‘Remedy’ showcases the outcome when inhabitants adapt, converge, and ultimately evolve, with the environment of this enigmatic land.  This process gives way to magical species that are amalgamations with human and floral-like characteristics.  It births bird-like women, hatches pink-haired creatures, and breathes life to horned beings.  These evolutionary changes blur the line between nature and its inhabitants, making distinction from one another difficult.”

Pulling from the meaning of the word remedy, this series illustrates a cure for the turbulent relationship between humans and nature. Rather than focusing on dominance, Nguyen’s work emphasizes the beauty of a synergistic relationship, one where humans are not the destroying force, but rather live in harmony creating true magic.

About Tran Nguyen
Tran Nguyen is an award-winning illustrator & fine artist. Born in Can Tho, Vietnam, she currently resides in Atlanta, Georgia.

Nguyen’s paintings are traditionally made with acrylic and colored pencil on paper. She’s most known for her paintings of whimsical women and their melancholic landscapes, which often possess an air of fantasy and surrealism. She creates illustrations for published media such as magazines, books, wine & beer packaging, animation, advertising, and mural work. Her clients include Tiger Beer, World Wildlife Fund, the Smithsonian magazine, and has showcased with galleries across the world.