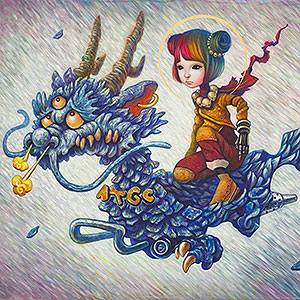 (LOS ANGELES, CA) – Thinkspace is pleased to present new works by Japanese artist Yosuke Ueno in But Beautiful. A self-taught painter based out of Tokyo, Ueno is known for his imaginative, character-driven worlds created in symbolic pursuit of innocence, hope, and positivity. These loosely narrative-based paintings evolve intuitively, the artist’s approach to his compositions seldom premeditated, preferring instead to embrace the creative tangents of his subconscious. By allowing the process of painting to dictate the outcome, the works host a recurring cast of playful creatures, hybrids, and psychotropic fantasies. The artist, amidst these playful gestures, emerges as an inventor of psychedelic metaphor and cultural pastiche, freely combining references to everything from Japanese culture, ancient Greek mythology, Tokyo Street fashion and video games to Disney animation and the Western canon of art history. Driven by a genuine desire to capture our philosophical interconnectivity through art, Ueno’s multicultural references coalesce through the unpretentious spontaneity of his imagination and a fundamental belief in the universality of a shared condition.

Thematically, Ueno’s works are inspired by several influences, including the polytheistic tradition of Japanese Shinto, an ancient Japanese religion with a symbolic tradition of personifying the sacred energies of every living and inanimate thing as individual deities. According to this worldview, the universe is a complex amalgam of sacred, interdependent energies and personalities, and the tangible vessels of this plane, inhabited by the spectral presence of spirits and ancestry. The multiplicity of this theistic framework posits the coexistence of complex symbolic worlds on an infinite level, with entire microcosms existing in endlessly divided parts of the whole: an infinite precondition necessary to the surreal.

Other major influences apparent in Ueno’s works include Japanese Animé, specifically Manga and Studio Ghibli, particularly the works of artist and filmmaker Hayao Miyazaki, and theatrical pictorial conventions borrowed from art history, like the memento mori typical of the Baroque or the Northern Renaissance’s penchant for Vanitas, both devices prophetic heralds emphasizing the inevitability of human mortality. Ueno has been known to appropriate classical works of art as well, directly reinterpreting them through the cast of his aesthetic; Johannes Vermeer’s mid-seventeenth century, The Milkmaid, and Manet’s Impressionist masterpiece, A Bar at the Folies-Bergère, for instance, have both made appearances in Ueno’s current repertoire.

Unexpected juxtapositions and cleverly contradictory elements emerge and interact within Ueno’s worlds, while a surreal freedom conflates the ordinary restrictions of time and space in support of its fantasies. The ancient and the contemporary are continually recombined, existing on a timeless plane through the simultaneous referencing of the traditional and pop-cultural. The unexpected poetry of these alliances, much like the paintings themselves, reveal complex accretions of cultural sediment, the result of an unimpeded admixture of worlds. Anchored by the concept of Yin and Yang and the elemental balance of the light and dark forces it implies, Ueno’s works strive to capture the plasticity and flux of these energetic constellations as they vie for poetic balance and positive resolve.