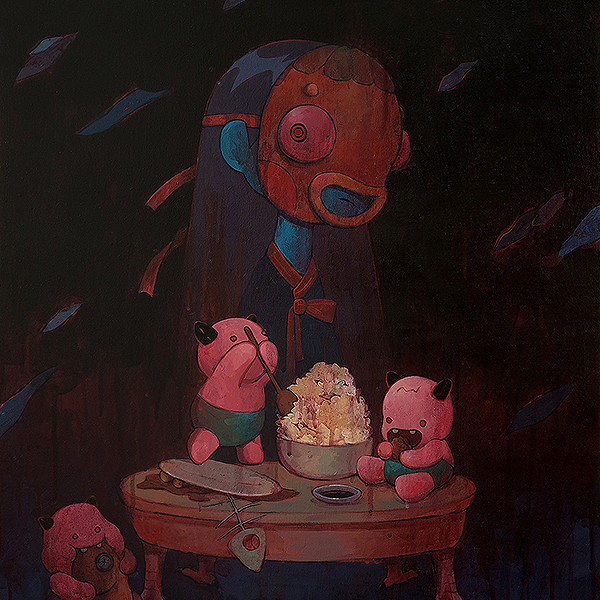 Opening Reception
Saturday, March 5 from 6PM-10PM
– Masks are required during your visit –

In this exhibition, Cha presents paintings that focus on various characters which often are juxtaposed against a thin line between reality and fantasy. Although the themes are seemingly whimsical in nature, they showcase underlying tropes of morality, life, and death. Cha takes her work to the next level, having often experimented with these creatures in the past, and taking this opportunity to unify them in a collection that deals in extremes.

‘Seesaw’ was inspired by Cha’s personal highs and lows throughout everyday life. Using themes from traditional Korean motifs and lore to stage her characters, she crafts surreal moments that are utterly engaging.

“I wanted to tell stories of ups and downs I experienced using characters and elements that are familiar to me. I experimented with low key and high key palettes as well as different mask designs to illustrate my ideas in a more surreal way.”

In doing so, Cha creates scenes that invite imagination from the viewers, leaving the “why” and “where” open to interpretation.

About Young-Ji Cha
Young-Ji Cha was born in Seoul, Korea, and currently works in Los Angeles, California. She started her training in classical fine arts and later in illustration. Her recent works are inspired by traditional folktales and various forms of animation. Besides freelance illustration and gallery art, Young-Ji Cha also works with various studios within the animation industry as a visual development artist.